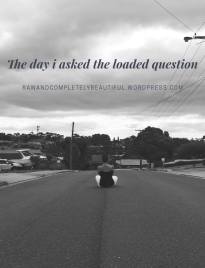 We are all familiar with the expression “be careful what you ask for”, right? Well I should have considered that before I did something that I believe changed the course of my life. The power of making statements out loud should not be taken lightly!

I believe in the power of the Universe.  I believe we are taken care of and guided all the time. Whatever you believe, we all have to have faith in something. I receive messages and experience syncronicities constantly. But it took my illness to really tune in and listen.

I had an amazing year in 2015. Some good, some bad. So much happened. I got married for the second time, we went on an incredible honeymoon, my eldest son was enduring Year 12 and we were negotiating life as a newly blended family.

As happy as I was, and as much as I enjoyed my job, I always felt there was something more. I felt like the ‘rat on the wheel’ and did my fair share of complaining as such. The poor girls I work with endured much during the six or so hours we sat together every day! Working full time and having such a big busy family was hard work. It was exhausting in fact. I felt stressed all the time. Worried about money (six kids is really expensive!!), and constantly thinking there has to be a better way.

In about August of that year I arrived at work one morning as per usual. I must have driven on autopilot because I couldn’t even remember getting there. I sat in the car for a few minutes, contemplating, and just threw my hands in the air and said outloud… “let me have it Universe, bring it all to me. What am I meant to be doing…? Little did I know at the time what was around the corner. I might as well have just sat in the middle of the road and waited for the bus.

In September I remembered that it had been some time since my last mammogram. I had been having them regularly since the age of 31 because of my Mum’s journey. I didn’t realise just how long I had left it. I had been so distracted with getting engaged, buying a house, moving two houses into one and organising a wedding, that I completely neglected my yearly routine. I finally made an appointment for early October.

The day before I went for my mammogram I found my lump. It was under my left nipple and it was bloody huge. I knew instantly. My heart sank. It had come from nowhere. I hadn’t felt it before and I knew it was foreign. It was my first time going to Breastscreen, as I had previously visited private practice for screenings.

When I told Breastscreen that I had found a lump they didn’t want to do the mammograms. They wanted me to go straight back to my GP. I insisted that they do them because I had my period, my boobs were normally lumpy during that time and I was already there.  They reluctantly agreed upon the understanding that if the lump was still there after my period finished I needed to go back to my doctor.

So another week passed. My lump was still there. I went to the GP and got my referral for the full screening at the place I had been previously for many years. I cried with the doctor. She was not my normal doctor and was young. I recognised her name. I had worked with her Mum who was a beautiful lady who had recently passed away after a long battle with cancer. I thought later how strange it was that I was at this appointment with her. I cried because I was frightened but I also cried for her Mum and my Mum. I mentioned that I had worked with her Mum and she cried too. So we all sat there crying together awkwardly and I tried to keep a brave face but I lost it. Deep down I knew what was coming.

The next day, Friday 15th October, I was sitting at work and rang the imaging company to make my full screening appointment. Not even half an hour later Breastscreen rang me and told me they had found a lump and that I needed a full screening. I said I had already made an appointment somewhere else.  They suggested that I would need to take the films with me. So I rang Phil, walked out of work (only two people knew what was going on) and we drove into the city to collect the films….

I opened the envelope… on the report was the circled word MALIGNENT.

I nearly threw up…I couldn’t believe what I was reading. My whole life flashed before my eyes. In his panic, Phil insisted, “I don’t care what we have to do, ring them and get in right now”. So I did, and they agreed to fit us in as soon as we could get there.

They did a biopsy. They called the doctor in. They weren’t saying anything. We asked for an explanation. They couldn’t confirm anything but replied with “you need to deal with this right now”.

OMG its 4pm on Friday afternoon, we are about to pick up the kids and you’ve just told me that?

Phil and I just held each other in the car and cried, and cried and cried… we couldn’t stop.

We had to pull ourselves together, pick up my kids and not let on that anything was up. I had no idea what or how I was going to tell them..

I couldn’t believe that I was going to give them that news. I knew what it felt like, and I knew how frightening it was going to be for them.

That was just the beginning of my journey…

This is me... I have been through a journey of much adversity in life. It has bent me, shaped me, cut me, hurt me and kicked me. But it has also encouraged me to learn, grow, change and rise like a Phoenix. I am stepping into my light, it is time. It is my hope that some of you may be able to relate, and in some way can take hope from my words for your own experience. We all have a lot to love about ourselves, each other and our universe... View more posts

7 thoughts on “The day I asked the loaded question..”